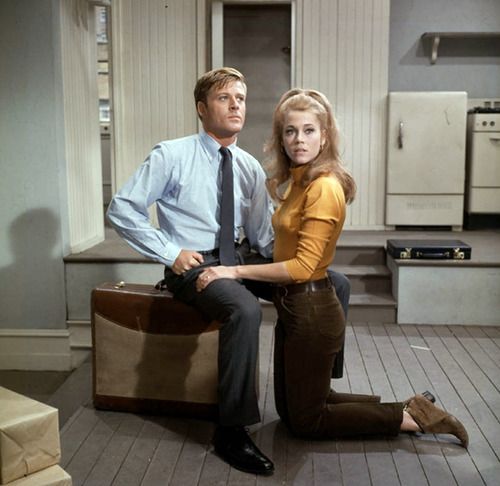 Whether you’re feeling low or totally loved up, a romantic comedy can be the remedy that just keeps giving. That little window into somebody else’s imperfect life with the inevitable happy ending – how can you not love a feel-good movie?

Maybe you feel fed up with work or the kids? Or perhaps you’re contemplating eating an entire pack of Ben & Jerry’s to make the stresses of the day melt away? Heck, who even needs an excuse!?

We love RomComs here at ModernDayMoms, so we thought we’d share our Top 10 RomComs to beat them all.

So, grab a great coffee, some popcorn, and some tissues. You’ve got ten fantastic movies to work your way through! Hell, maybe even have that Ben & Jerry’s at hand. Woah – Bridget Jones’s Diary was released twenty years ago? Now I feel old. But this golden oldie is undoubtedly one to cherish (and definitely the best of the lackluster follow-ups).

Based almost entirely around the plot of Jane Austen’s Pride and Prejudice (with a Mr. Darcy to boot), we cringe our way through Bridget’s many misdemeanors and humiliating set-pieces. And, maybe, this is the crux of what makes her story watchable time and time again: seeing our heroine battle with her personal demons to come good at the end.

Everyone can see a little of themselves in Bridget’s rather marvelous insecurities and, while she struggles and tries, we know that it’s all going to come good in the end.

Zellweger manages a pretty passable English accent and wholly embodies the role, while Hugh Grant makes his great departure from nice guy roles as he slimes his way into Bridget’s knickers. Colin Firth is the quintessential Englishman – staid and misunderstood – and utterly charming in this great bizarre early 2000s love triangle.

Sure, you’ve seen it a million times – but you can’t beat a bit of Bridget. (I’d maybe Pass on the sequels, though). This classic from the pen of romcom royalty, Nora Ephron, was the follow-up from When Harry Met Sally. And while most people consider this to be the poorer sibling of that particular masterpiece, there’s still LOTS to love in Meg Ryan and Tom Hanks’ offbeat tale of “will they won’t they?”

Tom Hanks plays a sad and lonely widower, trying his best to father his sass-talking son, Jonah, who calls in to a radio talk show to request a new mom. Hankies at the ready and inciting incident done and dusted, Annie (played by Ryan) falls in love with the voice on the radio.

And while this movie is a bit of a slop-fest, full of 90s rom-com cliches and a predictable selection of jazz standards, there’s a natural charm to this movie as we root for Ryan and Hanks to fall in love and right the problem of the world.

Sure, this is one that was custom-made for sentimentalists the world over, but what’s wrong with that? If you’re dry-eyed at the end of this Ephron success, you’re not even human! 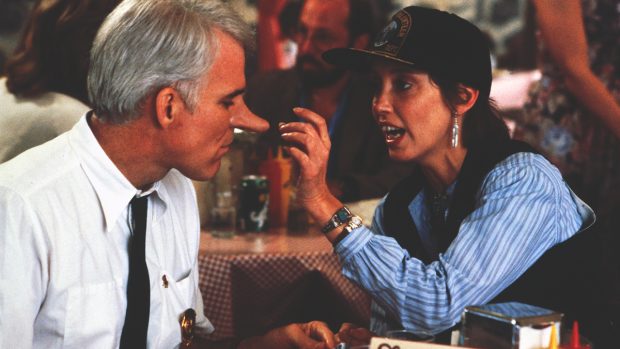 Steve Martin is at his romantic-lead best in this retelling of Rostand’s Cyrano de Bergerac – a tale of an ample-nosed poet whose words are more beautiful than his face.

This celebration of intellect over brawn is a classic tale of “let’s just be friends.” The plain guy (Steve Martin’s C.D. Bales) is beautiful on the inside, while the sexy, buff fire chief (Rick Rossovich’s Chris) is beautiful on the outside (but considerably lacking in the brain department).

Daryl Hannah plays a career-defining Roxanne: beautiful, intelligent, and craving communion with a mind as sharp as her own.

In a love-at-first-sight moment, Bales falls in love with Roxanne but believes she could never fall for someone with such facial imperfection as his own. So he shows his chivalry by supporting Chris in his attempts to woo the starry-eyed Roxanne.

Big problem: handsome Chris is possibly the dimmest bulb in the pack, so could it be possible to use Bales’s beautiful words behind Chris’s handsome face?

Fun, insightful, with plenty of laugh-out-loud moments, Roxanne could be the best rom-com you’ve not yet seen. This is one of those off-beat movies that brings back the confusing innocence of first love in the most charming way. It may feel hideously dated, and you may have trouble understanding the Glaswegian accents, but Gregory’s Girl is one of those charming British movies that celebrates simpler times.

John Gordon Sinclair plays Gregory, an awkward teenager who plays in his high school’s failing football team. When the coach decides to recruit new talent, Dorothy (played by Dee Hepburn) turns up and shows the boys how to do it. Despite the coach’s somewhat shockingly sexist misgivings, she proves to be an excellent player.

Gregory falls for Dorothy, but – as we all know – not all is easy on the path to love. An innocent return to bygone days with lots of laughs to be had from this touching comedy. This super-sweary Brit flick crosses the lines on a number of counts that probably don’t adhere to today’s high standards of conduct and behavior. Trigger warnings aside, Rita, Sue and Bob Too is a hilarious romp across the crumbling council estates of 1980s UK city of Bradford.

The premise is questionable for starters: thirty-something Bob is having an affair with teenage Rita and Sue. But controversy aside, this is one of the UK’s most beloved and quotable 1980s comedies.

With brilliant performances from the cast that brings out the mischeiviousness of youth, this is a tall tale of innocence lost. This is a film that rarely appears in the RomCom category but stick with us on this. Eternal Sunshine is a comedy/thriller/romance/sci-fi mash-up that slips so effortlessly between the genres that it feels wholly original. Written by Charlie Kaufman (Being John Malkovich), this is as batshit as romcoms get.

Primed for endless repeat viewings, this time-travel comedy features Jim Carrey and Kate Winslet as star-crossed lovers with a history that neither recall.

Meeting as strangers, they find something strangely familiar and immediately attractive about each other. Neither quite know how they know the other, but in the deep annals of their psyches, they know there’s some connection they can’t quite grasp.

We’re not going to spoil this one. It’s a movie that’s full of unpredictable twists and turns that defy the formulaic nature of most other romcoms – let’s face it, it’s from the mind of Charlie Kaufman, so it’s gonna be quite the ride.

Eternal Sunshine of the Spotless Mind is a movie you might well hate at first; until you find yourself dwelling over the plot while you do the washing up a couple of weeks later.

A movie to watch several times – and you’ll get something new with each repeated viewing. You’re welcome. :)

You don’t get much more iconic than a cast lead by Jane Fonda and Robert Redford – but it’s the supporting cast that also brings the real magic to this classic Neil Simons romantic comedy.

Redford and Fonda are newlyweds, about to embark on their first home together – a very funky New York apartment in need of some quick renovation. Redford plays Paul – a stick-in-the-mud lawyer – who marries vivacious and (at times) outrageous Corey, so expertly portrayed by Jane Fonda. They realize that married life is more challenging than they first thought as they settle into their apartment.

With hilarious supporting performances from Mildred Natwick as the mother Ethel and Charles Boyer as the bohemian Victor Velasco, there’s a genuinely magical chemistry between the performers in this timeless classic.

Barefoot in the Park is a touch of hygge on a cold, winter’s evening. If you haven’t seen it, stream it or buy it right now! The 1990s really was the decade of the Romantic Comedy, kicked off, perhaps, by this timeless remake of My Fair Lady. With a career-defining performance from the romantic leads Julia Roberts and Richard Gere, this movie GLEAMS with nostalgia and a feel-good ending that could warm the cockles of the most hard-hearted among us.

This satisfying rags-to-riches tale brings My Fair Lady up to date, placing Vivien (Roberts) in the role of high-class sex worker and Edward (Gere) as a ruthless businessman. As the story unfurls, we see Edward’s icy heart thaw and Vivien’s aspiration dare to emerge.

If you fancy something safe and memorable, Pretty Woman is undoubtedly the number one choice! The movie that launched a million careers, Four Weddings and a Funeral also reinvigorated the slightly flagging wedding “industry” for the remainder of the 90s.

Richard Curtis’s brilliant script is brought to life by a fabulous cast, headed by the irrepressible romantic Charles (played by Hugh Grant) and the worldly-wise Carrie (played by Andie McDowell).

Quintessentially English, Four Weddings is a classic take on well-to-do aspirational living that survives the passing of time.

It’s difficult to talk about Four Weddings without mentioning the gloriously sweary opening set-piece, thrusting us into the unpunctual, high-anxiety world of Charles and his quirky flatmate Scarlett (Charlotte Coleman). And, of course, that awful line about the rain delivered so flatly by McDowall.

Flaws and all, Four Weddings and a Funeral is a celebration of the trials and tribulations of unrequited (and requited) love. Nora Ephron’s romantic comedy masterpiece, When Harry Met Sally… astutely crystallized the difficulties of dating in your thirties like no movie before it. With a stunning cast including Meg Ryan, Billy Crystal, Carrie Fisher, and Bruno Kirby, this chronicle of love in the late eighties was brilliantly observed, with a beautifully constructed script.

I could talk ALL day about When Harry Met Sally. In fact, I have – check out my analysis of the screenplay in this podcast, where I DO talk about it at some considerable length!

Needless to say, this movie is on my annual watch list – I don’t think a single year passes without watching this absolute classic of a rom-com at least once. And with such a very Christmassy ending, this movie is THE way to get yourself into the Christmas spirit.

For watching time and time again.

So, there you have it. My Top 10 RomComs – guaranteed to warm the cockles and bring a little feel-good into miserable days. :)

« 10 of the Hardiest Houseplants: How To Avoid a Massacre

11 Hallowe’en Ideas That Take Little to No Work »