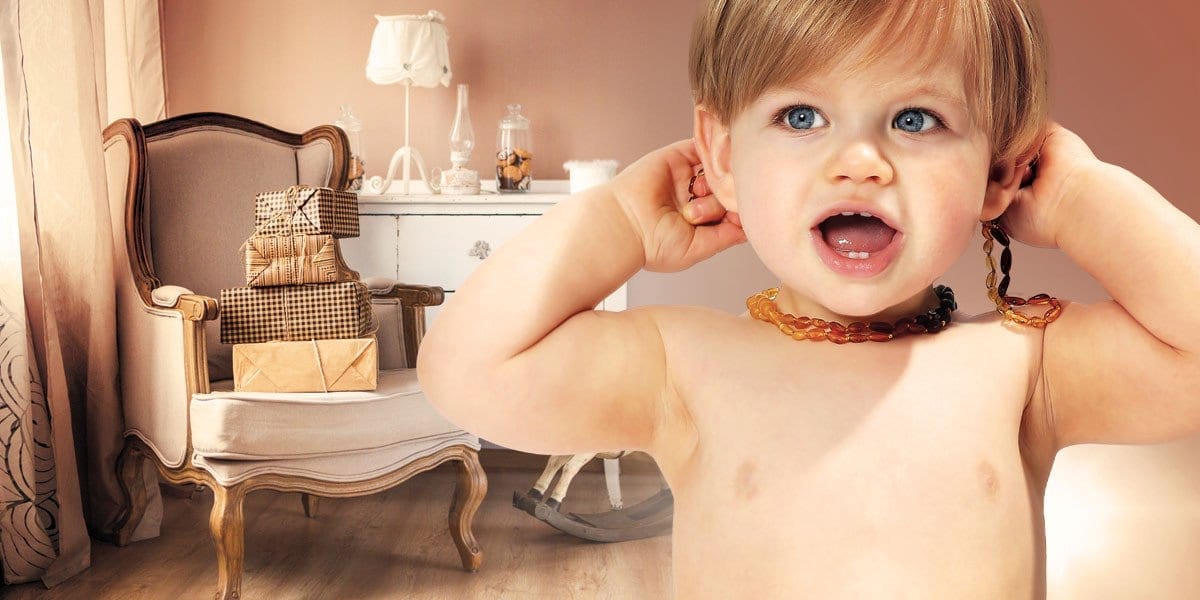 My kid started teething a year ago. Let me tell you – it was not pretty.

Oh, the screams, crying, and constant whining was enough to send me to my doctor for Xanax. Luckily, wine was a good replacement.

Anyway, I didn’t know what to do with Lilly. She was miserable. I can’t blame her. I wouldn’t want hard, pointy teeth pierce through my gums. Would you?

I took Lilly to the doctors to see what she thought I should do. The pediatrician said my only choice was give her some Tylenol and Motrin.

Lilly must be immune to Tylenol and Motrin because it was NOT working. My patience was running thin going into the second week of little sleep and a whole lot of noise throughout the day.

Just when I didn’t think I could take anymore, my friend told me about a baltic amber necklace. They are a natural remedy for teething, and can reduce inflammation, drooling, fever, and many other symptoms of teething.

I didn’t really believe it at first – a necklace to beat teething? Doesn’t sound right, but you know what? The thing actually worked.

I bought the amber teething necklace from Baltic Wonder. I read that you should buy a Baltic amber one because it’s the highest quality one. There’s this thing called Succinic Acid in the amber that is what helps babies with teething, and Baltic amber has the most in it. Baltic Wonder was the only site that I found that had this good quality amber. I’m sure there are other sites, but this one seemed to have excellent customer service, and they even sent me a certificate of authenticity. I felt like I made the right choice because if this one didn’t work, then I could at least say that I tried the best one.

My Experience When I Got It

When I got the necklace a couple days later, I seriously sat and prayed with it like it was a Rosary. I REALLY needed it to work. Yes, like my life depended on it. That’s why I titled this, “When You Cling for Dear Life on an Amber Teething Necklace.” I felt like if this didn’t work, I was doomed.

I decided to put it on her wrist because I didn’t like it being around her neck. Strangulation was not something I wanted to happen. Luckily, it wrapped around her wrist a couple of times nicely.

It was about three days when I started to feel a bit calmer. I wondered why, and then I realized that Lilly wasn’t whining as much. She wasn’t crying as much either. I took her temperature, and low and behold, she didn’t have a fever. That thing actually worked!

So, it’s been a year, and she’s been wearing it the whole time. I can honestly say that we haven’t had any other issues with teething. She’s been fine, and now has a few new teeth in her mouth, so I know that she’s been teething.

I would recommend this amber teething necklace, especially the Baltic amber ones. You should do some research. It’s really crazy how this thing works, and has worked for people around the world for hundreds years.