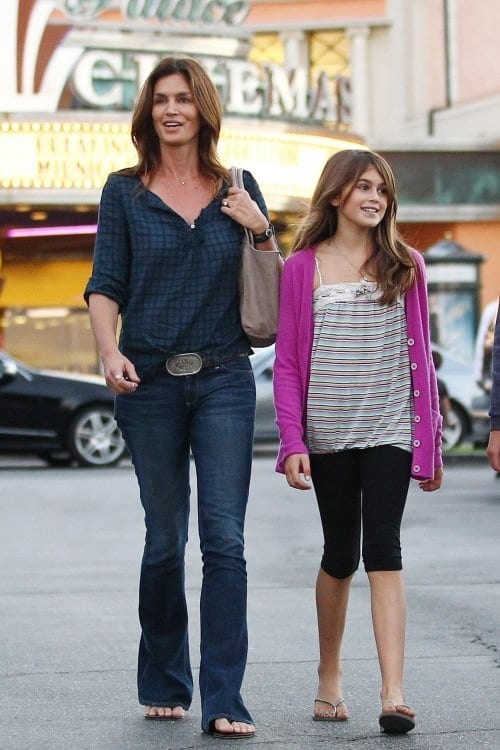 Some of the world’s most famous models have traded in their stilettos for strollers and the catwalk for the playground.

From Heidi Klum who has four children, to Cindy Crawford who is proud mom to two, to Brazilian beauty Gisele B ndchen who has two of her own and one stepson, let’s take a look at some of our favorite model moms. 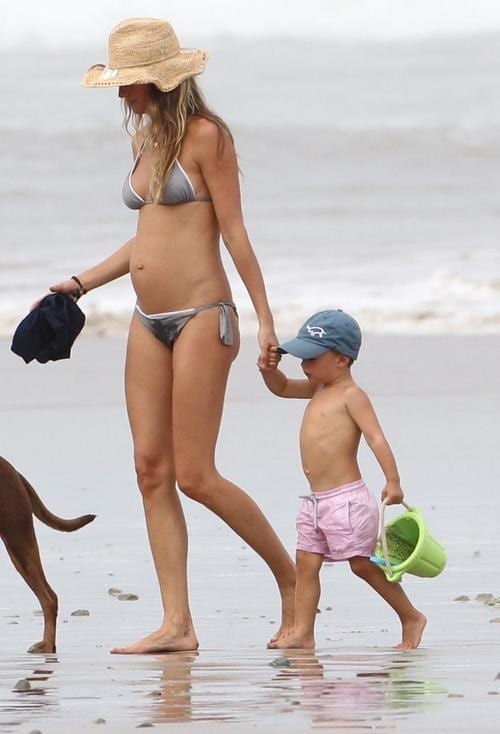 “We feel so lucky to have been able to experience the miracle of birth once again and are forever grateful for the opportunity to be the parents of another little angel,” Gisele and her New England Patriots quarterback husband Tom Brady said after their daughter’s birth.

Cindy Crawford and Rande Gerber are parents to son Presley, 13, and Kaia, 11. And it seems Cindy’s kids have inherited mom’s stunning good looks.

At the age of 10, Kaia made her modeling debut for Young Versace. But according to her model mom, her little lookalike won’t be making a career of it any time soon.

“At this point, she’s too young to pursue a career,” Cindy said. “There aren’t even a handful of jobs for a 10-year-old girl. But if she’s 17 and wants to try it…of course, what can I say? She’s really into singing and acting. She kind of jokingly said I’m not even sure if it was jokingly I might model first because you don’t have to know how to do anything, but then I want to be a baby nurse.'” 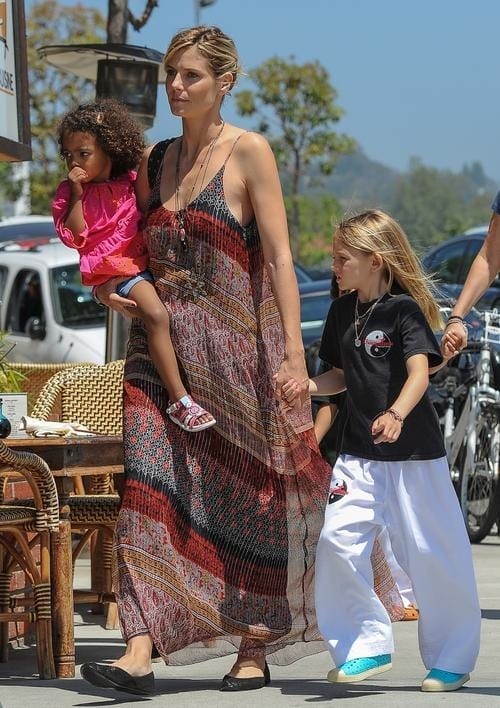 The Project Runway host – who is now dating her bodyguard Martin Kirsten – filed for divorce last April and said that their split was not “devastating.”

Christy Turlington:
From the catwalk and magazine covers to healthcare advocate, Christy Turlington has made it her mission to raise awareness about maternal mortality worldwide. The former supermodel has since made the documentary, No Woman, No Cry, and she is the founder of Every Mother Counts.

Mom to daughter Grace, 9, and 6-year-old son Finn with husband Edward Burns, Christy opened up to Celebrity Baby Scoop about trading in her stilettos for charity work.

“My daughter is particularly proud that it was her coming into the world that changed the course of my life to the extent that it has,” said Christy of how her healthcare advocacy began. “My son is always just happy to have me when he has me, but he’s also very generous and doesn’t mind sharing.”

“Anja had a lot of fun, she loved all of her outfits,” Alessandra said. “She was really into the polka dot trench coat.”

Rebecca has opened up about naming Dolly after her favorite singer, country superstar Dolly Parton, and Charlie was named after Jerry’s brother.

“It just worked out that way,” she added. “When I was pregnant, I named them before I even met them. I could sense which one was which. It was funny, the second or third day I was in the hospital, I tried swapping their names and nobody could do it. It was set, it was in the stars.”

The Resident Evil star recently revealed her plans to spend more down-time with her darling daughter.

“Until now I have mostly worked,” the Zoolander star said. “Since I was 16, I have travelled a lot, I’ve been to hundreds of places around the world, but if I were to say that I have seen something or that I remember where I went, I would be lying. Now I have made a pact with myself: I want to start travelling with my daughter Ever, and solely for pleasure, for vacation.”

Though they were headed for divorce, Stephanie said that on the eve of her court date with Brandt, “I had an epiphany. I went to my husband’s house with a sort of peace offering… and we just decided then and there to reconcile and work things out between us.”

“Marko and I are overjoyed to welcome Sienna into our family, and Valentina is looking forward to becoming a big sister,” Adriana said after Sienna’s birth. 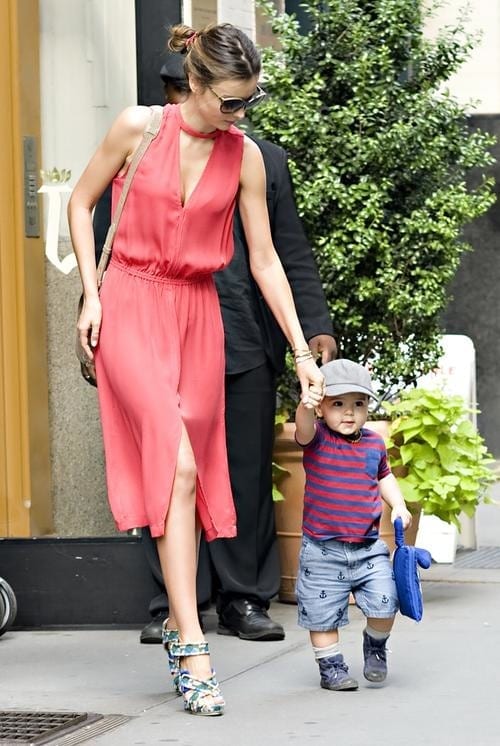 Although the industry expects supermodels to regain their svelte figure immediately, Miranda said her first priority was breastfeeding her babe.

“I didn’t feel pressure to snap back into shape,” she said. “My priority was just having my son and breastfeeding, which was something I really wanted to do, and it came easily.”

“I intend to breastfeed for as long as I can,” she added. “My breast milk will give our little Flynn the nutrition he needs for his continued healthy development and to all mums out there I am sure you will make the right choice for you and your baby.”

Holly Madison Debuts Post Baby Body
Christina Aguilera’s Weight Loss Secret Revealed
Julie Moran: The Balancing Act’ Could Be The Title Of My Life
Celeb Families Get Into The Easter Spirit
Catt Sadler: “It’s Really All About Focusing On What’s In Front Of Me”

Today’s guest blogger:
CelebrityBabyScoop.com is one of the most popular blogs on the topic and the foremost provider of everything celebrity-baby, featuring baby fashion, baby names, baby trends and up-to-the-minute celebrity baby gossip and pics. Get all the latest news, updates, and photos about Hollywood’s most beloved celebrity moms, dads and their babies. Who’s the latest Tinseltown baby? Who’s due next and who just announced a pregnancy? It’s all on Celebrity Baby Scoop. 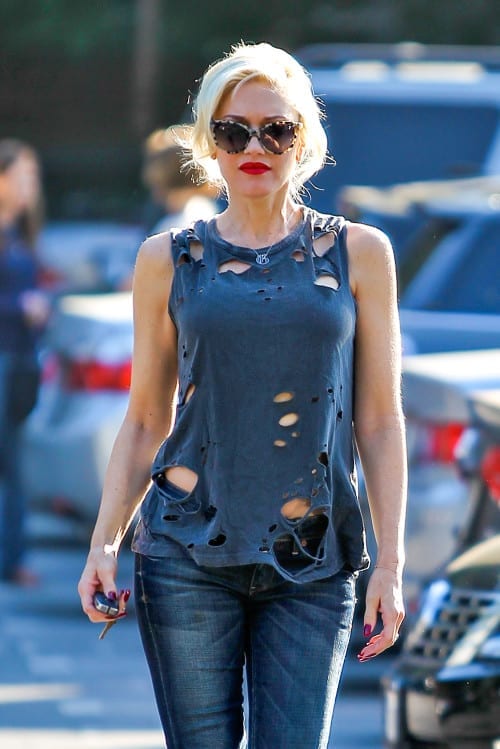 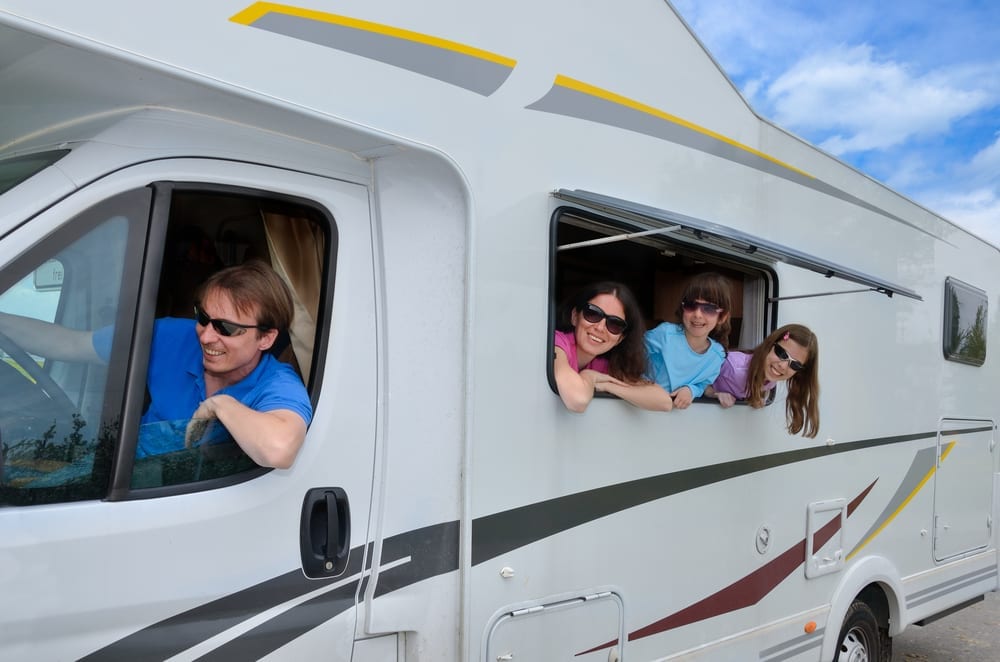 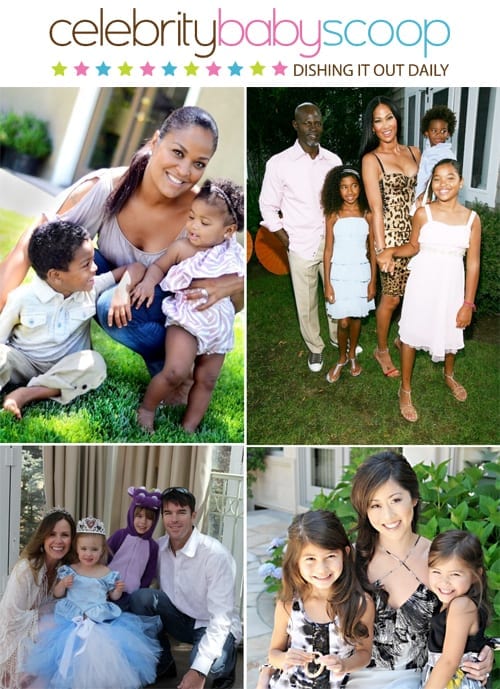