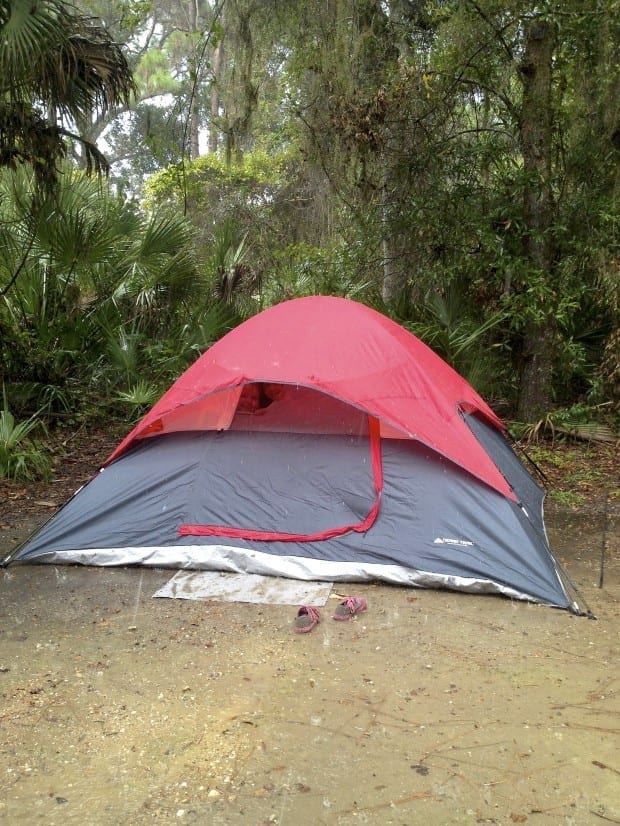 The great outdoors…. Nothing evokes a feeling of oneness with nature, and ultimate family bonding than the idea of a camping trip. I’m not talking cabins, or wooded motels, I mean setting up a tent and a campfire and roughing it for the weekend. My daughter and I set out for a night of fun when invited to come along with some friends to a campsite. We rushed to the store and picked out a few necessities like bug spray, snacks, matches and, well…a tent. You see neither of us had ever been camping. At least not that I could ever remember.

That didn’t stop us though, from fantasizing about the great time we would have. Spending the afternoon enjoying nature, fishing, building a fire, and eating together under the stars. What could be more peaceful and enjoyable than an evening on a campground. My daughter was just as excited as I was, and we really couldn’t wait to get going and start the fun.

We set up camp pretty quickly, and after a few sweltering moments of frustration in the sun, I was pretty proud of myself for setting up our tent. “This was money well spent” I thought to myself as I envisioned all the memories we would be sharing in this little portable abode. Tonight we are in a Floridian state park, enjoying the lush forest landscape, and maybe in a few years we will be sitting on the side of a mountain watching the fog of the morning roll off some mountains, as our family cuddles close and I stir, only to make sure our fire is still lit.

I snap back to reality when the kids hide in the tents and start playing with the iPods. I considered leaving ours at home, but they really can come in handy to quell any situational upset, so we packed ours along anyway.

“Time to explore!” my companion said, as the children all ran to attention and slathered on their bug spray and sunscreen. We started packing up our fishing gear in anticipation of a leisurely afternoon of fish practically jumping out of the lake, and onto our laps. That’s how I imagined it anyway.

We walked down a winding path that lead us to a fishing area, after a short stop at a playground on the way. There we found many families that ignored the warning of potential deadly amoeba activity in the water and were splashing away amidst it. I continued on to what looked like the perfect bench, and no sooner could I have turned around and there were the kids, chest deep in the lake. “I’d really rather you not be in the water, dear” I said to my child as I referenced the sign. She ignored me completely and promised she would stay safe and keep her head above water.

Finally, we urged the young ones to head towards our fishing spot. There was a turtle that seemed interested in what we were doing, that kept the children occupied as I set up some fishing lines. I cast two pole out and handled them over to the girls. “Catch the turtle!” They giggled. I reminded them that we were trying to catch fish and we better leave the turtle alone. I started giving my daughter a little instruction on technique and “Splash!”, the youngest of the companions children was up to his chin in water. I dropped what I was doing and yanked him out. Back to fishing. We reeled a few more lines in and cast them back out before my daughter was the next to become standing in water to her waist. Another child yanked out of the water and back on shore. After this is didn’t take to much more before they had all lost interest and we started packing out poles back away.

When we arrived back at camp, everyone was pretty hungry so my companion and I started working on a fire. “Do you kids want hot dogs, or hamburgers?” he asked, “We want Cheetos” they replied as they munched their way through half a bag. We sped up our pace to get the fire started and as my companion set up some kindling, I grabbed the matches and things started lighting. Admittedly both of us usually start fires with some starter fluid, but how hard could this be?

The fire lit right way, only to smolder out as soon as we put the collected twigs on top of it. In the middle of rainy season, the wood can be awfully damp. We started over again, kindling, small twigs, larger twigs and so on to watch the flames move further than before each time, only to smolder out again. When we started pouring our alcohol filled hand sanitizer atop the blaze, we were getting desperate. “Is the fire ready yet” we could hear the children asking, as our patience was running out. Just as we considered siphoning our gasoline to get this thing blazing, it took off and stayed lit.

When the larger logs got hot enough, we started cooking hotdogs and hamburgers both to please the discerning palette of first grade age children. Fortunately they had not eaten all the pop tarts and goldfish crackers, and some were still left from them trying to feed the rabid raccoon we ran into, and thry still had room for a little campfire grilled food. “It doesn’t get much better than a fire cooked hot dog” my companion said. “It sure doesn’t” I wholeheartedly agreed. The children were finishing off their food as the thunder clapped. They ran into the tent, and hid from the rain that soon followed.

This was the highlight of their time! They were laughing, playing and staring out into the downpour, as they delighted in the safety and dryness of the tent. Boy, this really was the life. Nothing could spoil this time, and as soon as the rain would pass, we would be back around the fire and enjoying some s’mores. So we waited for the rain to stop. We waited, and waited some more. We watched the sun dip beneath the tree line, and the only light now was the occasional flash of lightning from the continuing storm.

“Dad, I got a water drop on my nose” my daughter shouted from the tent, as I huddled in closer to the bench we had set up under a canopy. “It’s ok, as long as it’s not a lot of drips!” I replied. “Are you still having fun?” I shouted into the tightly zippered tent. “Ohhhh yeah” she laughed. This is why I was camping. It wasn’t to fulfill a need or want that I had, I wanted her to live a life having the memories that I wanted to have as a kid. The memories that I wished I was part of when children were bragging about their weekend camping trips at school. As long as she was having a good time, I would ignore the rain, the thunder, the sweat, the heat, the mosquitoes, and the now dripping, and dirty tent and honestly delight in the fact that she was enjoying herself creating a new memory with Dad.

The rain did finally let up, and the children emerged just long enough for my companions children to want to lay down and go to sleep. Not my daughter, however. She was going a mile a minute. I laid down with her in our tent, as she said to me the scariest thing of the entire trip. “Dad….my iPod died.” I almost gasped as I knew what was soon to come. The death of an iPod charge has disrupted many peaceful nights, but I tried to help her press on. I faked my way through telling her it just was time for bed, and we laid together, her in my arms listening to the sounds of the park around us. “Dad, I’m bored.” she mumbled. I couldn’t blame her, it was 8:55 and we were sitting in a sweating tent. “What was that sound?” she stammered as a bird squawked through the trees. “Dad” she said “I’m scared, and I don’t feel good, I want to go home.”

I couldn’t blame her. Sitting in a tent during a nice cool, sunny afternoon was a real treat. Laying on the cold and wet ground at night was a disaster. She and I sat around the fire for a little bit, contemplating what to do, but just like clockwork, the answer appeared when the rain started again. Much lighter than before, but still unpleasant. I will tell you this, it wasn’t raining hard enough for me to pack up our stuff and put it into the car.

I peeked into my companions tent and let him know we were uncomfortable and were gonna head on home. He looked relieved as I told him, and said I’d help him pack up now if he wanted to leave as well. He thought his kids would sleep better at home also, and we started tearing down the camp.

It is a little harder at night than it is in the day time to pack up, but despite some obvious frustrations we got out of there and didn’t look back. We drove down the road and my daughter said “Dad, I’m glad we made that decision, I’m glad we are going home.”

We got home, and went straight into the shower. We cleaned off, got a picture message from our friends with them smiling in bed in the pajamas, and we too, tucked ourselves in.

Camping wasn’t exactly what we expected, and perhaps given better conditions we could have enjoyed camping itself a little more. But the sentiment was not lost, and the memory, though imperfect was built with my precious daughter and our friends, and is there to stay. I don’t look at camping as something terrible that I wish I never had done, just something different than our normal night.

My daughter and I tried a new experience and perhaps it just wasn’t for us. There is no storybook example of what to do with your kids. No text book way of how to create good ole fashioned memories. Have we romanticized these ideas so much, that we make ourselves enjoy them just because we think we should?

We had many moments during the day that I thought I was going to burst with all the love I have for her, and we definitely bonded closer than we already were. As I try and teach her about new experiences, and life lessons, she continually lets me know that she is the teacher and I am here to learn from her. We are able to learn from each other. We already had all the fun, we already had the memories and it didn’t have to be perfect ones to be good ones. As much as I’ve told her it’s important to finish what you start, she taught me that sometimes its OK to just pack up and go home.

We were glad to sleep it all off in our own beds. We slept in, and I was able to clean up the mess from a late night camping pack up out of my car. There was only one thing I couldn’t figure out. As I tried to fit the tent back into its case for another day where we might try it again, I realized that it wouldn’t fit at all, but it fit perfectly into my trash can. I did consider it, but with memories like these I’d certainly give it another try. 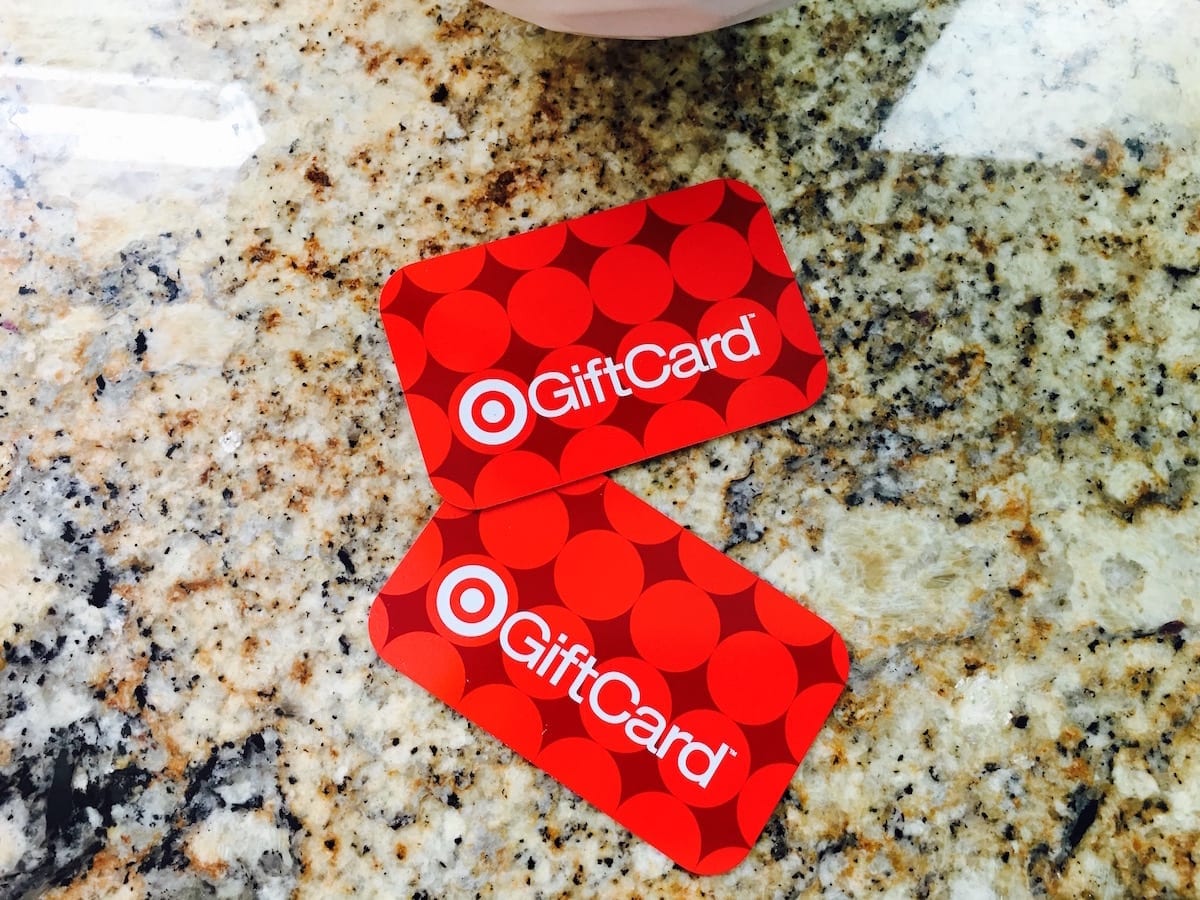 « How To Paint Everything Guide