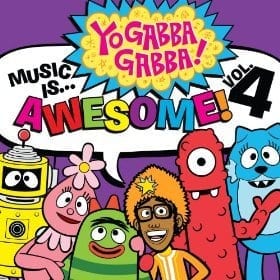 With the end of the year approaching, the time has come to reflect upon the best in music for 2012, which also means the announcement of AMAZON‘s annual best-of lists. Yo Gabba Gabba! has proudly been named Best Children’s Artist of the Year by AMAZON, as voted by the online retailers’ editors and online staff. The honor comes on the heels of the recently released, fan-favorite fourth installation of the Yo Gabba Gabba! Music is Awesome! acclaimed music series, YO GABBA GABBA! MUSIC IS… AWESOME!: VOLUME 4.

YO GABBA GABBA! MUSIC IS… AWESOME!: VOLUME 4, available now, features hit songs from the beloved television series where DJ Lance Rock, Muno, Plex, Foofa, Toodee and Brobee join their talented friends, releasing all new tracks for Yo Gabba Gabba! fans to jam along to. Tracks include catchy hits by Cut Copy, Rocket from The Crypt, George Clinton, Belle and Sebastian and many more. The latest single from YO GABBA GABBA! MUSIC IS AWESOME!: VOLUME 4, “Pancakes and Syrup” by Biz Markie is available now for free download via FILTER U.S. Recordings: http://bit.ly/QEPuLN.

GABBA GABBA! MUSIC IS… AWESOME!: Volume 4 is currently available for purchase on Amazon.com.

About Yo Gabba Gabba!:
Yo Gabba Gabba! is an award-winning, live-action television series and live stage show whose unconventional formula has created a triple stacked fan base, making it one of the most popular entertainment properties among preschoolers, parents and indie music lovers alike. Yo Gabba Gabba! is created by Christian Jacobs and Scott Schultz and is produced by The Magic Store and W!LDBRAIN Entertainment. Yo Gabba Gabba! airs seven days a week on Nick Jr. and in several major territories including Australia, Canada, France, Israel, Latin America, New Zealand, South Africa and the U.K. Yo Gabba Gabba! LIVE! launched in 2009 with a float in the Macy’s Thanksgiving Day Parade and an appearance at The White House. Since launch, the live touring show continues to sell out major markets across North America. Yo Gabba Gabba! LIVE!: Get the Sillies Out kicks off in Los Angeles this November. Yo Gabba Gabba! Consumer products are sold in mass and in specialty retail stores in several major territories, as well as online.

NEXT
TAGS:Amazon, Yo Gabba Gabba